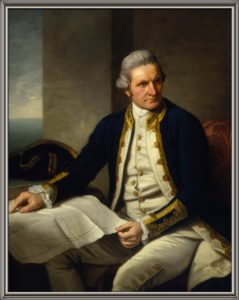 In 1768, the intrepid explorer and first class Navigator, Captain James Cook, set sail on his first voyage of discovery…

Successfully commanding his able crew past the unpredictable waters of Cape Horn and on-wards to the South Pacific island of Tahiti, Cook continued his exploration of the new world by circumnavigating and mapping the uncharted coastline of New Zealand. Sailing beyond the edge of the map to claim Australia for the British Crown. The rest, as they say… is history.

To mark the 250th Anniversary of the beginning of this landmark journey, we have created a fitting homage to Cook’s First Voyage and his discovery of new horizons – with our flagship gin…

The Sailors Friend…. Simple and effective, this refreshing little tipple was first created in the 19th Century for medicinal purposes, to prevent Royal Navy sailors contracting scurvy during long voyages at sea. Adding fresh lime to gin ensured the daily ration of Vitamin C was consumed.

A good tot of gin, A splash of lime juice and with a sweet syrup added in modern times… this classic cocktail was born!

A Brief History of Tonic

With the expansion of the British Empire in the 1800’s, Royal Navy sailors were setting sail to exotic destinations across the globe – including India, where malaria was rife! Navy ships were stocked with a remedy for the disease in the form of quinine powder – an extract from the bark of the Chinchona Tree (the ‘fever tree’). But due to the extremely high bitterness of the quinine, British officers created a sweeter, rudimentary ‘tonic’ to malaria, by adding water, sugar and lime. And with a good glug of navy rationed London Dry Gin for good luck… the humble G&T was born.